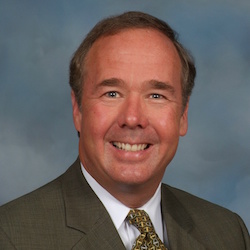 David James is an Insurance Verification Sales and Marketing Meteorologist.

David, a Northbrook, IL native is a degreed meteorologist and began his second tour with Murray and Trettel and Weather Command in 2006. David’s main focus is on insurance verifications and forensic meteorology. David is a member of the American Meteorological Society (AMS), American Public Works Association (APWA) and the Snow and Ice Management Association (SIMA).

David has more than 40 years’ experience as a meteorologist. He started his weather career as an Air Force Weather Officer at Keesler Air Force Base in Biloxi, MS. From 1976-1980, David was an operational forecaster for Murray and Trettel and Weather Command. In 1980, he began a 20 year run as a weather anchor and reporter for WRTV-TV in Indianapolis, IN. David received a Bachelor of Science degree in Meteorology from Parks College of St. Louis University and a Master’s Degree in Environmental Policy from Indiana University.

From 1984 to 2000, David was involved with Eastside Community Investments (ECI). ECI was a non-profit community development corporation seeking to provide affordable housing and spur economic development in low income neighborhoods on the near eastside of Indianapolis. For his efforts as a board member and executive director, he was awarded the “Distinguished Hoosier” from Indiana Governor Frank O’Bannon and Indianapolis Mayor Steve Goldsmith designated “David James Day” in July 1999.